Who runs the world? Girls. After running his mouth about Lena Dunham on his radio show, Howard Stern had the actress call in to offer her an apology. 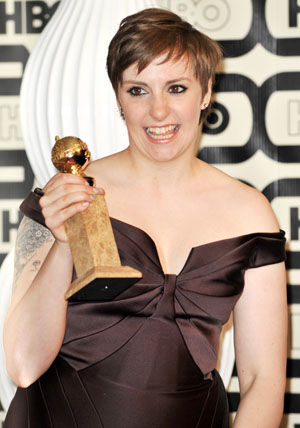 After spitting out some foul comments about Lena Dunham (the creator and star of HBO‘s Girls), Howard Stern put his foot in his mouth when the actress called in to his radio show.

If you hadn’t heard, Stern called Dunham “a little fat girl who kind of looks like Jonah Hill.”

He then continued with, “I learned that this little fat chick writes the show and directs the show, and that makes sense to me because she’s such a camera hog that the other characters barely are on.”

Cue public loathing. Stern quickly took it all back and issued an apology, even though Dunham seemed completely unfazed by the comment. The mouthy radio show host scheduled in a phone call from the actress yesterday morning to apologize on air.

“I have an opportunity to say, ‘Hey, Lena. I watched your show, and I hated it at first, but I stuck with it, and now I love it. That’s the story. And yeah, I was disturbed by you naked, and now I like when you’re naked. I don’t know… I had a change of heart.”

Dunham brought this puppy home, telling Stern in a completely calm and collected manner, “I’m a big fan of your particular brand of free speech.” She then added, “I’m not that fat, Howard. I don’t mean to take major issue with you about this. I’m not super thin, but I’m thin for, like, Detroit!”

Learn why you shouldn’t compare your body to others >>

“I appreciate it, and I appreciate your effort to rectify,” she stated. “But whether you’d done that or not, I’d have remained an [Stern] enthusiast.”

Bam! That’s our girl. Stern might have gotten his fame from running his mouth, but it’s not a licence to do so aimlessly. If he’s apologized for his statement, perhaps he shouldn’t have jumped the gun with his conclusions about Girls and insulted Dunham.

Britney Spears will not be coming back to The X Factor
Matt Damon “straddled” Michael Douglas
iCarly and Victorious spinoff a go-go!