Elton John and David Furnish are ecstatic with the arrival of their second son, born just this Friday. Guess what? His name is as long as their first son’s. 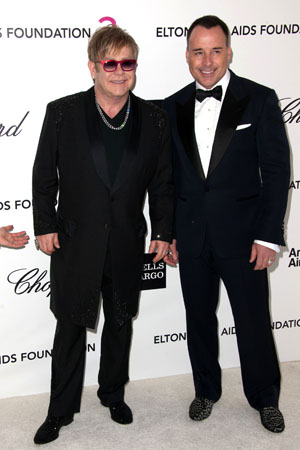 Elton John and David Furnish welcomed their second son this past Friday. What’s his name — or rather names?

Say “how do you do” to little Elijah Joseph Daniel Furnish-John!

We’re supposing he’ll go by Elijah on a day-to-day basis. The wee one was born through a surrogate in Los Angeles and weighed 8 pounds, 4 ounces.

“Both of us have longed to have children, but the reality that we now have two sons is almost unbelievable,” the couple told Hello!. “The birth of our second son completes our family in a most precious and perfect way. It is difficult to fully express how we are feeling at this time; we are just overwhelmed with happiness and excitement.”

The couple announced they were expecting back in October. John and Furnish welcomed their first son, Zachary Jackson Levon Furnish-John, together in December 2010.

Read more on other celebrity babies >>

They’re taking all the good names! If they have anymore children, there will be none left for the rest of us. We wonder what they’d name a daughter…

Either way, congrats to the proud papas! Opinions?