Jessica Simpson has been going from one baby to the next, all unintentionally! The star chatted with Jay Leno about getting married and pregnancies. 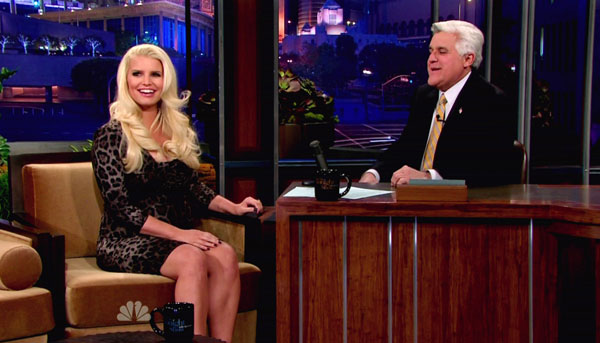 Poor girl! Don’t you just hate it when you can’t get married because you keep getting pregnant? If we had a nickel…

The adorable Jessica Simpson chatted with Jay Leno on The Tonight Show about her struggle with getting hitched to fiancé Eric Johnson. Her baby bump is always in the way!

“We’ve had two different wedding dates, but he keeps knocking me up,” the star joked. “We’re doing it very backwards, I know… I’ll just keep my legs crossed, I guess, this time.”

Check out these tips for healthy homemade baby food >>

Simpson gave birth to daughter Maxwell in May 2012 and announced her second pregnancy in December. She subsequently has dropped out of her Weight Watchers endorsement for the duration of her pregnancy. But Simpson claims she’ll be smarter about her eating this second time around.

“I was really happy to be pregnant, and I didn’t ever step on the scale,” she told Leno. “I didn’t realize you could gain that much weight that quickly.” She then added, “I didn’t really make any healthy good decisions.”

We hear ya! Who hasn’t inhaled deep-fried pickles nested in vanilla ice cream, covered in chocolate sauce? Just us? Fine. Be that way.

It’s great to have a celebrity to look up to who doesn’t rest on a personal trainer and is tripping over herself to look skeletal. Simpson is just your normal mum. Way to go! Opinions?