What a pairing! Carmen Electra addresses the swirling rumours of a possible relationship between her and The X Factor’s Simon Cowell. 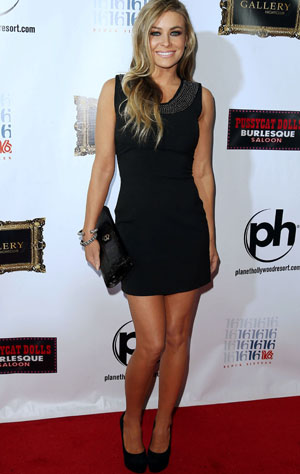 Carmen Electra has decided to subdue those beautiful rumours of a blossoming romance between her and X Factor creator Simon Cowell. Why can’t we all enjoy the fantasy?

In case you’re wondering, the rumours started when Electra and Cowell were spotted dining together way back in September; it was around the same time Carmen had broken up with fiancé Rob Patterson.

“We’ve hung out a few times,” she said. “He’s an awesome person. And I absolutely adore him.”

OK, so this could mean either the two are actually just friends or they are together but don’t want to make it official yet. Saying “we’re just friends” is just such a cliché line in the world of celebrityhood.

We’re keeping an eye on these two — there might be something there. What do you think?