Since the Taylor Swift and Harry Styles breakup rumours hit the world of entertainment, everyone was waiting for the songstress to hit the studio and pen another ex-beefrend song. Here we go. 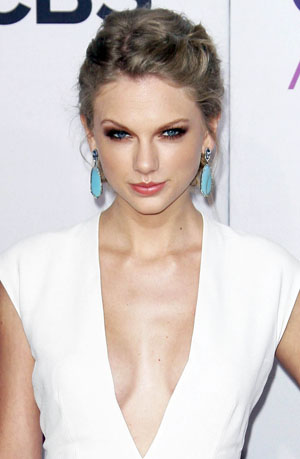 She knew he was trouble…

Taylor Swift is back to making music, and considering the rumour mill is on fire with Harry Styles breakup stories, we can only imagine what the songstress’s new songs will be about.

“Back in the studio. Uh oh…,” Swift tweeted.

So mysterious — what could she possibly mean? Well, if on a new track we pick up any references to being English, anything about a single or one direction, going off to an island or being on airplanes too often, we’ll know it’s about Styles.

Swift and the One Directioner reportedly broke it off whilst on vacation together. But that’s OK; Taylor attended the People’s Choice Awards and looked darn foiine (allow your eyes to drift to the photo on the right).

We wonder if Swift is earning a poor reputation in the celebrity world… Would anyone dare to date a songstress who practically name-drops her exes in angsty pop songs? Perhaps not, but we can’t wait to see who’s next.

What do you think a song about Harry Styles should be titled? We’re thinking “Wrong Direction” or “I Knew You Had that Ex Factor” (get it?).