This isn’t something you hear every day… Justin Bieber is the subject of a lawsuit by a former bodyguard who claims the little pop star punched him repeatedly in the chest and owes him money. 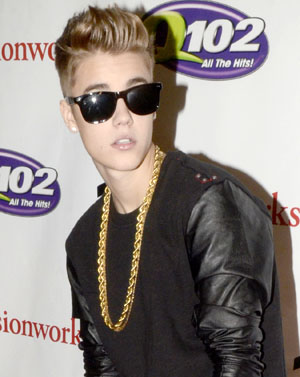 It’s almost like a scene out of a movie…

Here’s a real entertainment treat. Justin Bieber‘s former personal bodyguard is suing the pop star for — brace yourselves — assault and battery as well as owed wages after an interesting backstage incident.

The suit was filed in the Los Angeles Superior Court by Moshe Benabou, who claims he is owed $421,261 in wages. The former bodyguard also claims an altercation occurred between himself and Bieber, with the latter punching him in the chest.

“Justin Bieber, egged on by a small group of his ‘companions,’ launched an abusive tirade against Moshe Benabou,” stated the legal documents. “The tirade was apparently triggered by what Justin Bieber perceived as an attempt by Moshe Benabou to keep one member of Mr. Bieber’s entourage physically away from Justin Bieber. As part of his tirade, Justin Bieber repeatedly punched [the plaintiff] in the chest and upper body area.”

Don’t you just picture a snowflake assaulting a mountain? In what universe would someone of Bieber’s physical structure consider that a good idea?

Mr. Benabou asserts he did not retaliate to Bieber’s attempts to hurt him, and the singer then fired him. The kid’s got a fiery temper…

Justin’s reps have not responded to the lawsuit.

What do you think? Is there any truth to this?