Personal histories always add an extra facet to the choice of name for a child, no? Matthew McConaughey discusses the process of choosing his newborn son’s name. 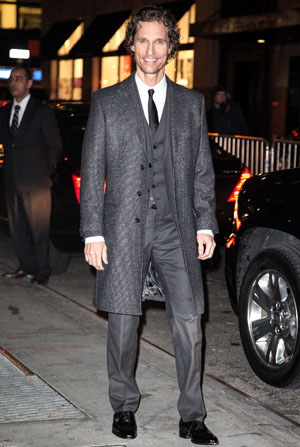 Matthew McConaughey and his beautiful wife, Camila Alves, welcomed their son Livingston into the world just a little over a week ago. So what’s behind the name? A great story of turmoil and history, surely…

“It just means Livingston, actually,” the actor told E! News. “There’s not a big history behind it.”

Yes, bask in the glory of that revelation. It turns out McConaughey and Alves are just creative baby namers. Nothing to do with any deep and profound connection to the moniker.

“In some religious texts it meant like grace of God,” Matthew continued, “but at that time, where the name came from, they were giving a lot of names by what your occupation was. Like Baker came from a person who was actually a baker. So I’m going with the art of living.”

This is the third child for the couple, who are also proud parents to 4-year-old Levi and 3-year-old Vida.

We like Livingston, despite the lack of story… What do you think?