What is it now? This girl should be banned from the dating world… Taylor Swift and Harry Styles reportedly broke up during their holiday. 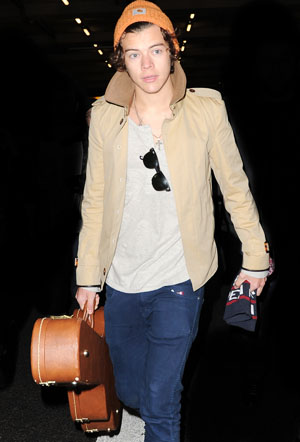 This is shocking; we thought they’d last forever…

Harry Styles, it appears, has joined Taylor Swift‘s lengthy resume of ex-boyfriends after the couple had a reportedly huge fight during their vacation.

Per Us Magazine, this is what went down: “According to the reports, Swift, 23, and Styles, 18, decided to end their vacation together in Virgin Gorda, the third largest of the British Virgin Islands, after a heated argument last week. Swift reportedly cut her trip short and headed home to Nashville to begin rehearsing for her tour after the fight, but Styles continued his travels by visiting Richard Branson’s home.”

We can’t help but wonder what kind of poppy hit will capture Harry Styles in all his boy-banding glory. The One Directioner joins Jake Gyllenhaal, John Mayer and Conor Kennedy on the wall of the singer’s swift conquests.

Before you start bawling over the lost possibility of a “Taylor Styles” or hug your voodoo dolls for a job well done, there has been no official confirmation yet. Hold your horses.

Are you sad to see them break up, or giddy with excitement?