The bride can walk down the aisle to the theme song and everything… George Lucas is engaged to his girlfriend, Mellody Hobson. 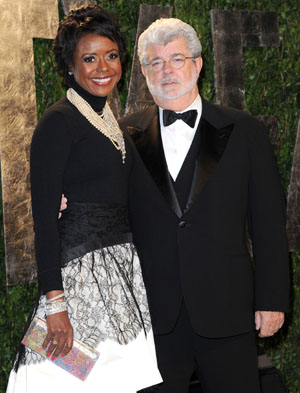 He did say he was ready to move on…

George Lucas, 68, is engaged to his girlfriend of seven years, 43-year-old Mellody Hobson. That’s right — the mastermind behind the iconic Star Wars films is ready to walk down the aisle one more time!

The director recently pocketed a subtle $4 billion from the sale of his company, Lucasfilm, of which the majority of the profit is being donated to charity. We’re sure he kept a fraction of that, give or take a couple hundred million… Basically enough for a wedding and then some.

This will be Lucas’ second marriage. He was previously married to Marcia Lou Griffin. The director also has three adopted children: Amanda, Katie and Jett. It’s a first trip down the aisle for Hobson, who is the president of the Chicago investment firm Ariel Investments, LLC.

No word yet as to the planned grandeur of the wedding or when it will take place. How amazing would it be if it was Star Wars-themed? Lucas as a Jedi and Hobson as Princess Leia? Best idea, ever.

Congrats to the happy couple! Opinions?