Gérard Depardieu is back in the news today. President Putin granted the actor Russian citizenship when the former renounced his French residency. 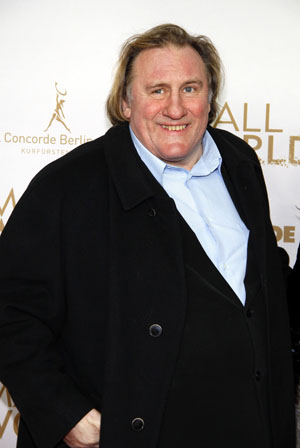 Someone must have bribed the Kremlin with a basket of vodka…

Gérard Depardieu has been graciously granted the gift of Russian citizenship by the country’s President, Vladimir Putin, after the former threatened to renounce his French citizenship in protest to high taxation.

Putin signed the executive order to bequeath the right of residency to the 64-year-old French actor, but Depardieu has yet to publicly accept it. Russia was amongst several refugee countries the actor was considering a move to. Montenegro and Belgium were also in the running for his residential affections.

Depardieu has been in the headlines of late for avoiding payment of French taxes by bouncing between Belgium and France. The actor’s assets are taxed at a rate over 75 per cent!

“I never killed anybody, I do not think I’m unworthy, I paid 145 million in tax in 45 years, I have 80 people working in companies that were created for them and which are managed by them,” Depardieu wrote in an open letter to the French prime minister.

If the actor does choose to move to Russia, he can keepsies those millions and hangskies with Putin on his horse in the Caucasus Mountains with a pickle in one hand and moonshine in the other… Velkom!