Can we be Anne Hathaway, pretty please? The actress spent her New Year’s Eve in some fashionable company, performing at Valentino’s end-of-the-year party. 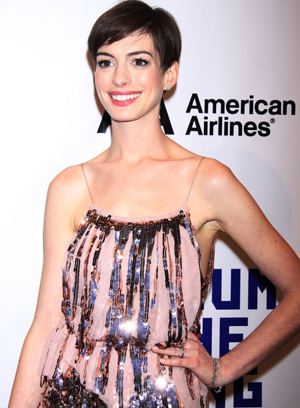 This woman must be pure magic. Otherwise this makes no sense.

While most of us were either at the local bar or glued to the tube, watching the New Year’s Eve concerts, Anne Hathaway was casually strolling about in Switzerland, arm in arm with fashion god Valentino. Ain’t no thang…

The actress was spotted with Valentino and his partner, Giancarlo, in Gstaad, Switzerland, taking a leisurely walk on New Year’s Eve. According to reports, Hathaway was in town to sing at the designer’s New Year’s Eve party at his ski resort cottage, along with… Madonna! That’s right; the two planned a duet together.

Hathaway’s husband, Adam Shulman, was on hand to support the actress during her performance.

Valentino reportedly spent 500,000 euros on fireworks, hors d’oeuvres and drinks alone. Throw a three-course meal in there, and it probably pushed past the one-million-euro threshold. Our invite must have gotten lost in the mail.

As they say, if you got it, flaunt it. Would you want to attend a fete of such proportions?