Not the best news for the new year… Hillary Clinton has been hospitalized in New York after doctors discovered a blood clot during a routine follow-up exam. 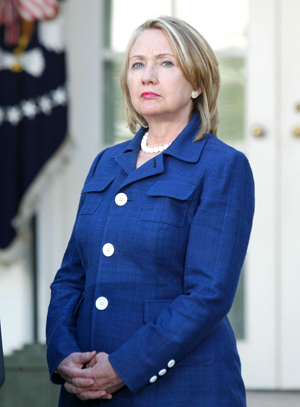 Hillary Clinton, the U.S. secretary of state, has been hospitalized for treatment of a blood clot linked to the concussion she suffered earlier this month.

It has not been revealed where the clot has formed, but it was reportedly discovered during a follow-up exam yesterday. Clinton has been given anticoagulants and will remain at the New York-Presbyterian Hospital for the next 48 hours (at least) while the doctors monitor the medication.

Clinton suffered the concussion a few weeks ago when she fainted while recovering from a stomach flu, which left her dangerously dehydrated. She was forced to cancel her subsequent trips overseas.

“Her doctors will continue to assess her condition, including other issues associated with her concussion,” Clinton’s spokesperson, Philippe Reines, said in a statement. “They will determine if any further action is required.”

The treatment, of course, depends on where the blood clot is. Clots in the legs are treated with simple blood thinners, whereas those in the lungs or the brain require swift action and can be deadly.

We wish Clinton all the best and hope to hear some good news soon. Stay tuned! Opinions?