Aw, puppy love! Emma Stone and Andrew Garfield — or cutest couple ever — adopted a golden retriever from a high-kill shelter just before Christmas. 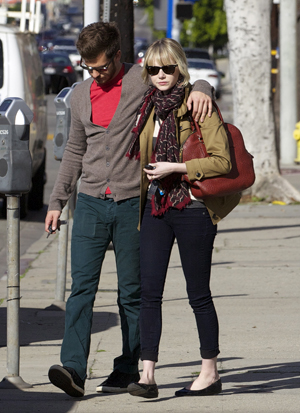 We hope your walls are stain-proof, because you’re about to explode from cuteness overload!

Per People magazine, the couple initially fostered the canine, named Ren, but could not bear to part with him… And voila, he was adopted. According to reports, Ren was rescued from a high-kill shelter, which elevates this duo to saint level, we believe.

Now, just take a moment to visualize Emma and Andrew being all cutesy together… Then add a golden retriever to that image. Explosion of unbearable adorability!

We’d also like to point out that while this couple is part of an elite of the privileged and the filthy rich, they opted to adopt a dog. We should all take note and follow suit; those pets deserve homes too.

Well done, Emdrew! What do you think?

Emma Stone and Andrew Garfield show off their charities
5 Best students of film
Jamie Foxx as a comic book villain?