We love us some Katie Holmes, but the theatre critics are not on the same page. Dead Accounts, a Broadway play starring Katie Holmes, will be closing almost two months ahead of schedule. 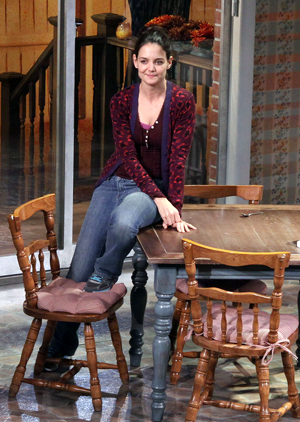 We suppose this house was not a home for this production.

Holmes plays an Ohio woman who is unexpectedly reunited with her brother, who turns the entire family upside down. The play initially was scheduled to run until Feb. 24, but will now close on Jan. 6.

“I am extremely proud of this production and the cast,” Jeffrey Finn, producer, said in a statement, per E! News. “Theresa Rebeck and Jack O’Brien have created an inspiring and hilarious new play, and we are all sad to see Dead Accounts end on Broadway. I look forward to working with this remarkably talented cast and creative team again very soon.”

So if you’re interested in seeing Katie Holmes do her thang or just wanted to check out a decent comedy on Broadway, buy those tickets!

We hope to see Holmes back onstage again; we love her to bits. Come to Stratford, perhaps? Opinions?