This is just ridiculous… A petition carrying thousands of signatures is fighting to have Piers Morgan deported for making anti-gun comments deemed unconstitutional. 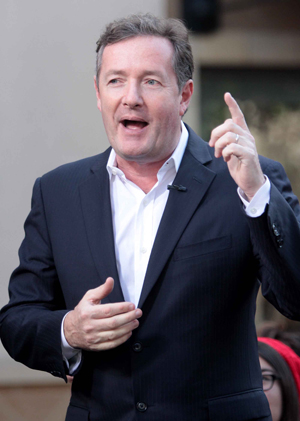 Oh, this just brings a tear of immeasurable pride to our eye.

Piers Morgan is the subject of a growing petition aimed at having him deported for making anti-gun comments post Newtown shooting. You read that right — a deportation petition.

The petition posted on the White House website was initiated by a “Kurt N.” from Austin, Texas, and already has over 72,000 signatures.

“British Citizen and CNN television host Piers Morgan is engaged in a hostile attack against the U.S. Constitution by targeting the Second Amendment. We demand that Mr. Morgan be deported immediately for his effort to undermine the Bill of Rights and for exploiting his position as a national network television host to stage attacks against the rights of American citizens.”

The White House requires 25,000 signatures within the month of a petition’s creation to make a response. Obviously this one has surpassed that mark. We shall see how this develops.

Morgan has been quite vocal about the implementation of a more stringent gun policy in the States, especially after the tragic shooting at Sandy Hook Elementary School in Newtown, Connecticut.

We are with Mr. Morgan on this. Freedom of speech should reign over the Second Amendment. A country needs to understand its needs, and evidently guns and their misuse is becoming a trying issue for the American nation — action must be taken. The Second Amendment is only as good as its context, which, due to progress, was lost a long time ago. It’s time to let it go.