Our hopes for humanity have come and gone… Amber Rose and Wiz Khalifa talk about their baby and the rapper’s appreciation of Mary Jane. 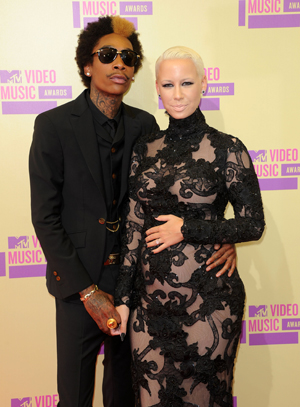 You know how sometimes you think, “Gee, there should be a screening process for future parents to make sure they’re qualified for the job!”

This is one of those instances…

Wiz Khalifa and a very pregnant Amber Rose (she’s in her third trimester!) got a little candid with E! News, speaking about the life lessons their son will have to learn — in particular, Papa’s adoration for marijuana…

“I think it’s all about how you’re raised with it,” the rapper said. “Before there was a much more negative outtake on it. You know, pot and what it can do and the effects of it.”

Khalifa added, “I’m not going to be smoking right there over the baby, because smoke in general and being high is not good for a kid. None of that. But definitely he’s going to know what it is — and he’ll know the difference between being a child and not being able to use it and being an adult and knowing how to use it.”

Ah, this brings a tear of pride to our eye… This kind of logic has certainly helped parents curb underage drinking, smoking and sex. We’re assuming Wiz also has a cure for teenage rebellion and attitude. Maybe the mama-to-be can shed some light on this for us.

“It’s just like alcohol, basically. That’s how I feel about it, you know. When you’re a kid, you know that you’re not supposed to drink alcohol, that it’s for adults and that’s it,” Amber stated, then added, “Our son is just going to know that daddy likes to smoke.”

That’s it — we’re throwing in the towel. Game over. This couple better be made out of magical parenting sparkles that will enable them to steer this baby in the right direction.

What do you think? Opinions?

Harry and Taylor go to a tattoo parlour
Wiz Khalifa busted for marijuana
Wiz Khalifa and Amber Rose are engaged!