Kids these days grow up too fast. The 18-year-old One Directioner Harry Styles got a massive arm tattoo, while his girlfriend, Taylor Swift, stood by in support. 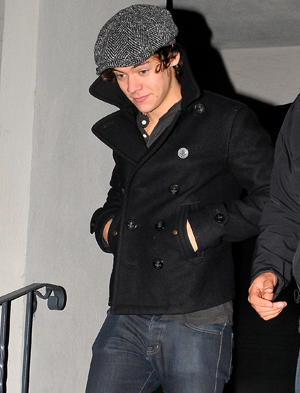 This could have gone wrong so quickly…

Taylor Swift and her baby boo, Harry Styles, went to get a tattoo. No, not matching names tattoos, though that would have been awesome!

The 18-year-old One Directioner had a huuuge ship inked on his left arm while in Los Angeles on Tuesday, by famous tattoo artist Freddy Negrete. Swift, 23, was on deck — erm — on hand to support her adorable boyfriend.

So, why a ship? No explanation was provided, but we can get creative with this… Maybe since Harry is English and his land is surrounded by water, he’s got an attachment to the Navy? Granted, Styles is practically from the Midlands, but water could still be symbolic to him, right? Or he’s a fan of Popeye. Or he’s fascinated with ships in bottles. Or he’s a fan of ship building and engineering… We think we’re getting close.

Either way, we can’t wait until it heals and he can show it off to the entire world. What do you think?