This is tougher to untangle than a Gordian knot… Christina Milian talks about her best friend, Karrueche Tran, and her relationship with Chris Brown. 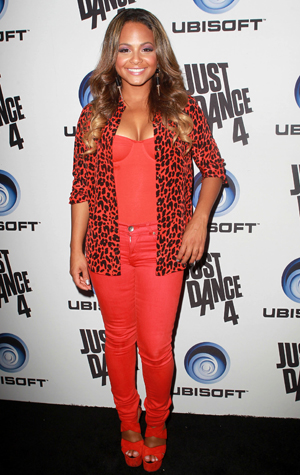 Oh sweet baby Lord and all the cathedral bells… What is going on between Rihanna and Chris Brown?

It seemed like the two were back together after a multitude of half-naked Instagram photos flooded the internet. Then Brown’s “ex-girlfriend,” Karrueche Tran, joined him on tour, and Rihanna went ballistic… So are they or aren’t they?

Tran’s BFF, Christina Milian, took the courtesy of dispelling a few rumours when she visited The Wendy Williams Show. Here’s what she had to say:

“You know what? From what I’ve always known, she’s his girlfriend,” the singer told the show’s host. “And that’s where it lies for me. I see everything in the media. I really don’t get into the detail of it, but I think everybody has their own life and how they deal with things. They have the right to handle it how they want.”

Rihanna has been Twitter-ing some angry thangs of late since the news of Tran jetting off to join Brown hit the web. The songstress tweeted, “Goodbye muthaf***er.”

Both tweets have since been deleted. The mystery deepens. Some drama is afoot, and it’s only a matter of time before it unveils before our very eyes. Or we may be reading into this too much.

What do you guys think is going on between these two?

Hey, Chris Brown and Rihanna, what’s going on?
Rihanna’s bad-girl lifestyle getting “out of control”: Source
Rihanna and Chris Brown caught making out!