Megan Fox visited Jay Leno and talked about becoming a mum. The sleepless nights, the joys and the tears… Did we mention she looks amazing? 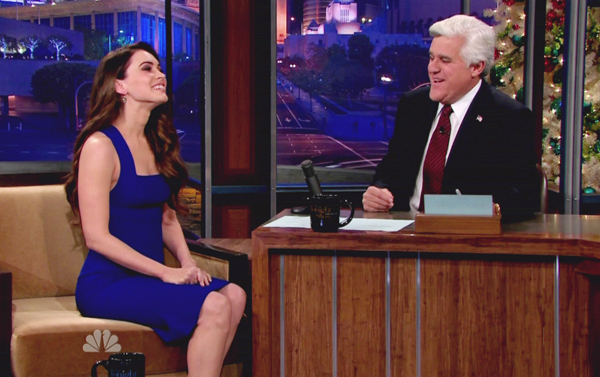 OK, this woman did not have a baby just a few months ago — no way.

Megan Fox paid a visit to Jay Leno on The Tonight Show to talk about life post-birth-of-first-child and to essentially rub our faces in her gorgeousness. Mission accomplished.

The 26-year-old actress floated (yes, floated) onto the set, wearing a fitted blue Roland Mouret dress and with a figure that makes us want to switch to an all-liquid diet. We’re no chefs, but that is one tasty dish.

So, how is motherhood treating Fox? The star, who is married to Brian Austin Green, gave birth to little Noah in late September and has had plenty of adventure time already.

“I love it. It’s my favourite thing that I’ve ever done so far, so I’m happy with it,” the actress told Leno, before admitting that the couple hired a night nurse for two nights a week to allow some time for sleep.

“Having an infant is difficult. It’s a lot of work, and I didn’t hire any help because I overestimated my own abilities,” she continued. “I said to Brian, ‘We have to get a night nurse, or we’re going to get a divorce, because someone’s got to sleep in this house, or we’re going to kill each other.'”

Oh, the cold, harsh reality of babies. Doesn’t everyone wish they could afford a night nurse for at least one night a week? Dare to dream…

Glad to see Fox out and about again. We are also incredibly jealous of her magical slimming abilities.