We are nothing but for it! The beautiful and talented actor Hugh Jackman has been honoured with a star on the Hollywood Walk of Fame. Anne Hathaway and Amanda Seyfried were on hand to offer support. 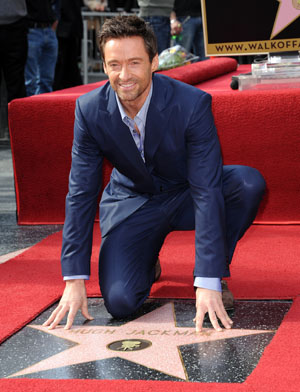 It was a big day for Hugh Jackman yesterday! The 44-year-old Aussie actor was honoured with a star on the Hollywood Walk of Fame.

Jackman was supported by his wife, Deborra-Lee Furness, as well as Les Miserables co-stars Anne Hathaway and Amanda Seyfried. He was introduced by television host and funnyman Jay Leno.

“It’s kind of a surreal day,” the actor told E! News. “I’ll probably always remember Thursday, Dec. 13, and I think I’m either going straight from here to buy a lottery ticket or to a casino, because it just feels like someone is looking down on me in a very nice way at this moment.”

This week Jackman also received a Screen Actors Guild and Golden Globe nomination for his role as Jean Valjean in Les Mis. Life is not too bad for the actor right now.

“I’m excited. The star is right here outside where I got to host the Oscars, and if the movie gets nominated [for an Oscar], it’ll be nice to get up there and show a little bit of the show to everybody,” Jackman added.

If that means seeing the hunky actor prancing around and singing again, the Academy Awards better be typing out his name on the nominations list right now. Seriously, right now.

Opinions? Well-deserved star or not so much?