The law is not Lindsay Lohan’s friend. The actress’s probation was revoked during the latest court hearing, stemming from her car accident in the summer. 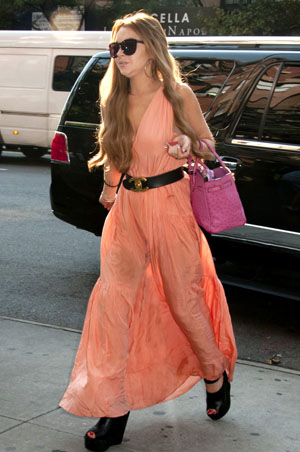 Oh, we knew it. Call us magic, but we saw this coming…

Our embodiment of a Greek tragedy, Lindsay Lohan, skipped out on a court hearing (as expected) in Los Angeles and subsequently was not present to watch her probation being revoked. This little manoeuvre could actually put the actress back in gaol… Dun, dun, dun!

Lohan’s magical attorney, Shawn Holley, has extended the hearing to Jan. 15, which is when the actress will be formally charged with three counts of misdemeanour.

Our little acting unicorn is facing counts of wilfully resisting, delaying or obstructing a police officer or emergency medical technician; giving false information to a police officer; and driving a vehicle on a highway with wilful and wanton disregard for the safety of person or property. All this, sprouting from a June car accident in Santa Monica, when Lohan denied being the driver of the “guilty” vehicle.

The maximum sentence Lindsay could get at this point is 245 days in jail. The actress still needs to show up to court and have her face preserved in a mug shot. She has quite a gallery of those now.

Meanwhile, on the East Coast, Lohan is expected in the New York court to be charged for the alleged assault of a woman, Tiffany Mitchell, in a nightclub.