Here’s a palm-to-face moment. Lindsay Lohan has decided to skip out on the old court date and fly to London to watch The Wanted instead. Good choices are being made. 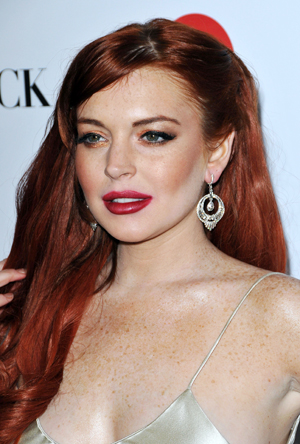 We love celebrities who have their priorities straight…

Lindsay Lohan has opted to follow English boy band The Wanted to London instead of attending her court date in Los Angeles pertaining to the car accident this summer.

The actress has been quite the fan-girl of the pop band of late… Rumours have it that the lead singer, Max George, has taken a fancy to her. Lohan attended the band’s performance at Madison Square Garden and was arrested the same night. Then she watched them in Philadelphia at the Jingle Ball. Then again in Boston and New York. Now she’s jetting off to London and then, Dubai.

To clarify, LiLo will not get into trouble for not attending the hearing; she’s not required to. Her attorney, Shawn Holley, will be there to represent her interests. To briefly ruminate, stemming from Lohan’s accident on Malibu’s Pacific Coast Highway, the actress is facing counts of resisting arrest, obstructing an officer in the course of his duties, providing false information to an officer and reckless driving. Ain’t no thang, not even worth showing up for.

Concert? Or court hearing that could potentially negatively impact her life? It’s a tough one, but… Concert, of course!

Well, then… Wisdom through age, right? What do you guys think?