This is a welcome change. Lindsay Lohan hung out with the fellas of The Wanted while they were performing at a Christmas concert in Philadelphia. 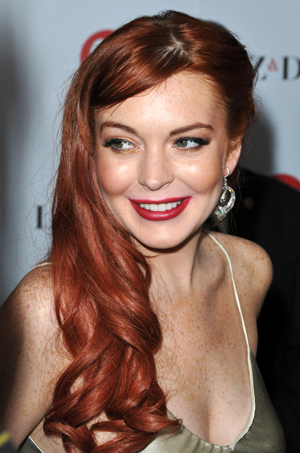 Cue celebrations! Lindsay Lohan did not get arrested this week.

The actress, recovering from last week’s nightclub brawl arrest, attended the peaceful Q102’s Jingle Ball concert in Philadelphia. Quite a change of pace, no?

Last Thursday Lohan was arrested for allegedly punching a woman in the face. We want to say it probably wasn’t her fault, but we’d be lying. Yesterday the star opted to support her musical pals, The Wanted, during a performance at the radio station’s Christmas concert.

“EXCLUSIVE PHOTO: @lindsaylohan backstage at #Q102JingleBall where she’s hanging with Max and @TheWantedMusic!” the station tweeted.

There was a short-lived rumour of Lohan igniting a romance with The Wanted’s 24-year-old singer, Max George, but per E! News, Max was at the nightclub on that fateful night of the arrest and is no longer interested in that way…

“She’s the best drunk in New York. She was cool. She had a bit of a scrap but it wasn’t down to us,” George told E!.

We’re glad Lohan is taking it easy for now, and we’re still — oddly enough — in love with her. Opinions?