Why would anyone choose to take Angelina Jolie off the movie theatre screens? Apparently the actress is planning to retire soon so she can focus on being a mum and dedicate more time to her duties with the United Nations. 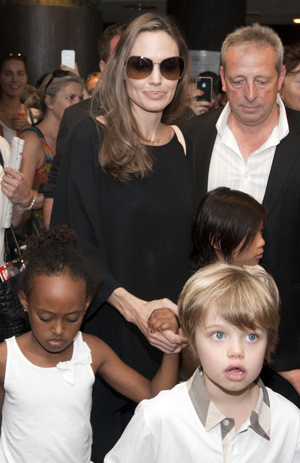 So, not only is Angelina Jolie incredibly, inhumanly beautiful, she is also an amazing human being and not a fame chaser. How cruel to the rest of us.

The 37-year-old actress revealed that she is planning to quit the acting business in the near future — the very near future.

“I think I’m going to have to give up the acting as the kids hit the teenage years, anyway. Too much to manage at home,” Jolie told British Channel 4 News.

In case you’re wondering, the actress’s eldest, Maddox, is already 11 years old. But fear not, the Oscar-winner and United Nations Ambassador isn’t oblivious to the doors the film industry opened for her.

“I have enjoyed being an actress,” Jolie stated. “I am so grateful to the job, and I have had great experiences, and I have even been able to tell stories and be a part of stories that mattered, and I have done things for fun, but…”

Continuing, “I will do some films, and I am so fortunate to have the job. It’s a really lucky profession to be a part of, and I enjoy it.” She added, “But if it went away tomorrow, I would be very happy to be home with the children. I wake up in the morning as a mum, and I turn on the news like everybody else, and I see what’s happening, and I want to be part of the world in a positive way.”

Jolie’s performance is still highly anticipated in Maleficent, a new Sleeping Beauty film told from the villain’s perspective. It’s slated for release in 2014. From then on, who knows? Perhaps full-time for the U.N.?