Tonight was the very last episode of the first ever Bachelor Canada series. Are wedding bells in the near future for Brad and Bianka? Was Whitney into Brad at all? Find out here! 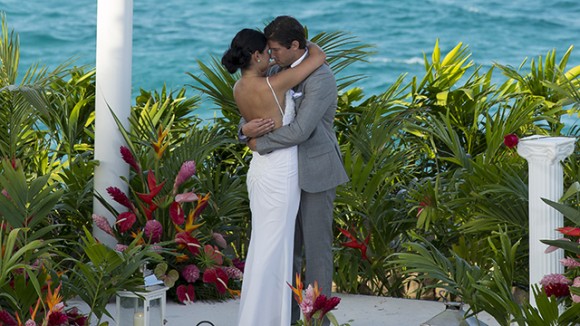 Whitney and Brad were reunited

Well, this pair definitely had a confusing journey on The Bachelor. During their very first hug, it seemed as though they would never let go. Then fast-forward to the finale a couple of months later, and Brad was trying to explain that they weren’t working as Whitney closed the door on him. Quite the downward turn! Given how little we get to see of each bachelorette, it’s pretty hard to get a solid read on them — especially one as confusing and seemingly standoffish as Whitney. But rather than getting mad after she admitted to having been unsure about their relationship for the whole second half of the show, Brad simply advised her to continue working on connecting her head and her heart. Now that sounds like a guy who’s done some serious soul-searching. So it was happy endings all around!

Rapid-fire with The Bachelor = the best thing ever!

Our neighbours to the south may have come up with The Bachelor franchise, but tonight we added something truly magnificent to the mix: Bachelor Rapid-fire. It entailed Tyler Harcott asking Brad a series of sometimes intimate, sometimes hilarious questions. Why does Brad have such an affinity for the deep V-neck T-shirt? To show off his tattoo. Which bachelorette is the best kisser? Bianka. Who is the best-smelling bachelorette? Bianka. Who’s the smartest? Bianka. (It may be rapid-fire, but he’s no fool.) We also learned he bites his nails, has an obsession with grooming his hair (as demonstrated by an assemblage of video clips) and wears “as much as [he] can” to bed. All right, that last one wasn’t as exciting as we’d hoped, but we’ll take what we can get.

With most Bachelors, the girl who doesn’t open up right away gets cut pretty quickly. But luckily that wasn’t the case here. Bianka may have been a little cautious and closed off when she first met Brad, but it paid off. It showed Brad she wasn’t going to go all in just because he was Canada’s first Bachelor. He was going to have to do some good old-fashioned wooing to win this one. And he did! It’s a good thing too, because their relationship only seems to have grown since filming ended, and they were every bit the head-over-heels-in-love couple tonight. In a show filled with shots of them looking intensely into each other’s eyes and kissing romantically on the beach, it was nice to see their quirky, funny sides this evening. And if you have your heart set on a Bachelor Canada wedding, it sounds like one might be just around the corner!