Actor Jared Leto made an appearance at the Gotham Awards, debuting a new look that involved… no eyebrows? That’s right. 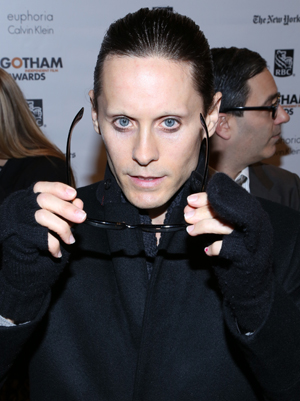 The 40-year-old actor appeared at the Annual Gotham Awards in New York City on Monday looking like a skulking minion of something evil, but fear not — it was for art! Leto shaved off those eyebrows for his role in the film Dallas Buyers Club so he could pencil them back in as his cross-dressing character.

Dallas Buyers Club is getting quite a bit of buzz right now, especially since Matthew McConaughey dropped 30 pounds for his lead role. The film is based on the true story of Ron Woodruff, a womanizer who contracted AIDS in 1986 and helped legalize the drug cocktails used to treat individuals with HIV/AIDS. Leto plays Rayon, who helps Woodruff smuggle in drugs from Mexico. Jennifer Garner also appears in the film as Woodruff’s doctor.

Until the film wraps up, Leto will be in a constant state of visual surprise, yes?

What do you think of the actor’s new look?