Have you ever wondered how to get the most important places in the world shut down? Just film a movie with Tom Cruise! 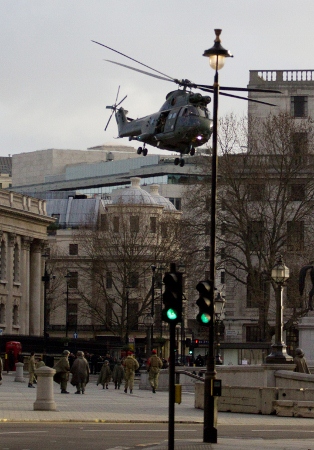 If, for any reason, you need to get a large section of a major city to shut down, it would seem the best way to do so is to get Tom Cruise involved. That technique certainly worked this past weekend, when one of London’s biggest tourist attractions, Trafalgar Square, was shut down for the filming of the upcoming sci-fi flick All You Need Is Kill.

And this isn’t the first time a city has given a Cruise film free range. For the 2001 film Vanilla Sky, Times Square in New York City was closed for a full two and a half hours on a Sunday morning — and let’s face it, that hub of activity shuts down for nothing. Unless, of course, you’re Tom Cruise.

Trafalgar Square was closed to average folk for four hours this past Sunday, much to the frustration of Londoners and the confusion of tourists. Tanks rolled in, extras dressed as soldiers patrolled the area, and helicopters carrying the one and only Cruise soared overhead. These certainly aren’t sights you expect on your average daily commute!

What kind of epic movie might require this type of superstar treatment, you ask? Well, one that involves aliens, time loops and battles, of course! Don’t get too excited about catching the dramatic footage that must have been shot, though. The film doesn’t come out until 2014, so you’ll have to wait a little while before you can check out Cruise, Emily Blunt and Bill Paxton in this film, directed by The Bourne Identity‘s Doug Liman. It seems bound to be a crazy ride!

Tom Cruise will not press charges against trespasser
Tom Cruise sues for defamation
Tom and Katie’s divorce has something for everyone!