Not the greatest way to celebrate… Gabriel Aubry and Olivier Martinez got into a fistfight in front of Halle Berry’s home in Los Angeles. Aubry was arrested and booked. 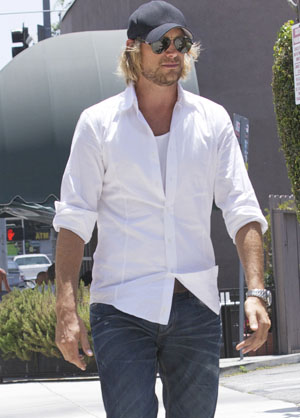 In this case you can be thankful people don’t have spikes growing out of their knuckles, yes?

Halle Berry‘s ex, Gabriel Aubry, and fiance, Olivier Martinez, got into a physical altercation yesterday morning in front of the actress’s Los Angeles home, which resulted in Aubry’s arrest. Did someone forget the cranberry sauce?

Aubry was taken to a nearby hospital to be treated for injuries and then transferred to the Metro Detention Center to be booked for battery. His bail is reportedly set at $20,000.

According to TMZ, Martinez was treated in the same emergency room and later released. The scuffle allegedly broke out when Aubry arrived to drop off 4-year-old daughter Nahla at Berry’s home. That was when the fists came out.

To refresh historical facts here, Aubry and Berry began dating in 2005, had Nahla in 2008 and parted ways in 2010. This was when the custody battle ensued. That same year Berry started dating Olivier Martinez, and the couple announced their engagement in March.

Can’t we all just get along? Opinions?

Halle Berry “healthy” after nasty fall
Halle Berry to paparazzi: “Our children should be off limits”
Halle Berry on marriage: “I’m a hopeless romantic”