In the season of Americans giving thanks and with Christmas around the corner, this is not the greatest situation. But Kimora Lee Simmons and Djimon Hounsou have parted ways after more than five years together. 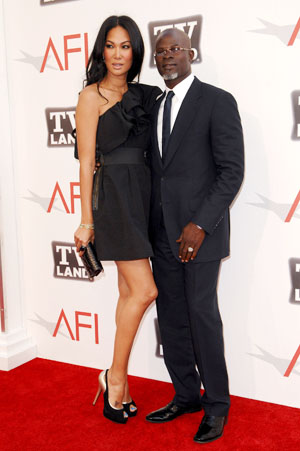 Alas, while many are mentally preparing for the awesomeness of turkey feasting down in the States, some come bearing bad news…

“Djimon Hounsou and Kimora Lee Simmons have officially separated after five and a half years,” Hounsou’s rep stated through E! News. “Though never married, they have one child together, Kenzo Lee Hounsou, who is 3 1/2 years old.”

Simmons began dating Hounsou in 2007 while separated from then husband Russell Simmons. The couple had a Benin wedding ceremony in 2008 but was never officially married in the U.S. They have a son together, Kenzo Lee Hounsou. Simmons has two daughters from her marriage to Russell, 12-year-old Ming and 10-year-old Aoki.

Simmons discussed the separation via Twitter, stating, “There have been quite a few hurtful rumors circulating. The truth is Djimon+I have been separated for some time. We have remained happy, loving, co-parenting friends+family. We all have much to be thankful for.”

There you have it. Opinions?

Kat Von D and Deadmau5 split!
Did Russell Crowe and wife split up?
Amy Poehler and Will Arnett split up!