Matthew McConaughey shares his weight loss story and the difficulties of dropping 38 pounds for his latest movie role. He also shares his fantasy sandwich for post-filming. 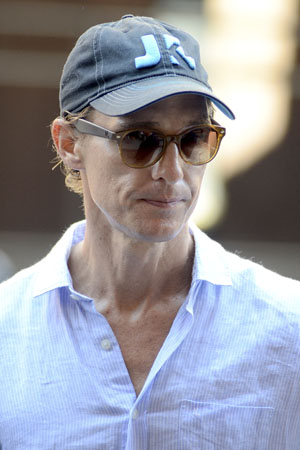 Usually Matthew McConaughey looks like a holiday treat sent by the mighty gods of athleticism and aestheticism, but nowadays he is but a wisp of his former glory…

In a bout to portray a man diagnosed with HIV/AIDS in The Dallas Buyer’s Club, McConaughey has shed a remarkable 38 pounds. How did he do it? Just as a side note, in comparison to his Magic Mike physique, the actor currently looks like something his former self would gobble down in a protein shake…

“Overall, [I’ve] probably got 35 per cent less energy, but there’s been plateaus,” McConaughey told Hitfix. “Getting past 170 was really hard, but then once you get [to] 167, the next seven come off easy. Getting past 160, really hard. But then you fly down to 150. Getting past 150 was really hard, and then bam! Got down to 143, and that’s where I want to be. So, once you get past the plateau, your body seems to understand, ‘OK, this is where we’re leaving now, this is where we are,’ and so the energy rises.”

Is anyone else cringing at the 143 pounds, wishing that number would come up on their scale, maybe if we start going to the gym regularly? So how did this honkin’ piece of muscle drop all that weight?

“I’m doing cardio, but I’ll tell you what, the more I’ve learned is — and I think it comes with age too — is it’s 90 per cent diet,” the actor continued. “It’s 90 per cent amount and then what you’re eating, because right now I’m not losing anymore weight if I burn 1,500 calories, two hours of cardio in an afternoon, or if I don’t. It doesn’t matter. It’s a matter of how much I eat or how little I eat.”

Oh, that’s right, diet… That thing. We’re glad McConaughey has more dedication than most people in the world. We hope all this work and lack of eating will pay off in the film. But once the filming wraps up, the actor already has celebratory plans.

“I will have some 70 per cent beef, 30 per cent fat ground beef, maybe a half-pound cheeseburger with another three types of cheese. I’ll prepare it all, and I’ll make sure that it takes three hours just to prepare,” McConaughey quipped. “I’m going to have buns with butter on both sides, toasted and grilled. I’m going to melt the cheese on the top bun, Hellmann’s Real Mayonnaise. I want kosher dill pickles sliced nice and thin, diced white onions, slightly grilled until they get almost hard, and some thin jalapeno slices. And then I’m just going to sit back and let the [expletive] just drop on the ground.”

Well chosen. The Dallas Buyer’s Club is directed by Jean-Marc Vallee and also stars Jennifer Garner as well as Jared Leto. The film is based on the true story of Ron Woodroof.

What do you guys think of these extreme measures? Opinionate!