It would not be wise to make any jokes about this, yes? Katt Williams has been arrested in Oakland after allegedly assaulting a man with a bottle. 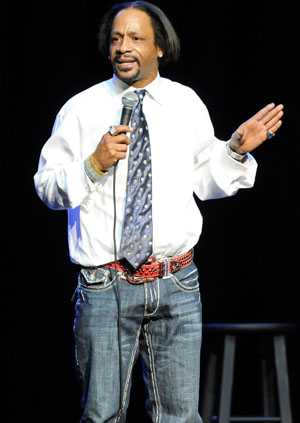 At least this time it’s not some heckler, right? No? You’re right.

Katt Williams was arrested Wednesday night on suspicion of assault with a deadly weapon. Basically the 41-year-old comedian is accused of bludgeoning an unidentified 18-year-old male on the head with a bottle in downtown Oakland, California. Just keepin’ a low profile, you know?

The police responded to a call about a man bleeding from the head, who then pointed his finger in Williams’ direction. The altercation reportedly took place on a tour bus. The comedian was found in a nightclub and apprehended.

The identity of the victim and his relation to Williams is yet to be revealed. The good news is the comedian didn’t resist arrest. But he did threaten to cancel his comedy show scheduled for tonight at Oakland’s Oracle Arena, as documented in a grainy video obtained by TMZ.

Fear not, the show is still on.

So the lesson here is, wear a helmet around Katt Williams on Wednesday nights. Opinions?

Channing Tatum is the Sexiest Man Alive!
Up for a dinner with Gwyneth Paltrow?
Modern Family‘s Ariel Winter has broken up with boyfriend