Kristen Stewart is on fire! With the Twilight franchise wrapping up, the actress is showing no signs of slowing down and is ready to work some more. 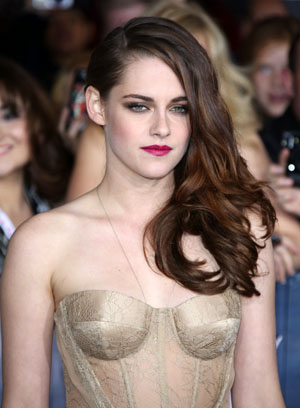 With the end of the Twilight Saga, some of us are sad (the younger sector), and some of us are joyous (the rest of us). But what shall become of the stars of the franchise?

“I’m kinda desperate to get a job right now,” the 22-year-old actress told E! News. “I’m itching to go back to work.”

That’s like looking forward to Mondays — it makes absolutely no sense! Where’s Stewart’s reckless mentality, where she wants to be a bum and throw her money off a skyscraper? What a mystery she is.

And since the Twilight conclusion is the theme here, what was Stewart’s first day on the set like?

“We shot the climax of the movie at the very start of production, and I almost passed out before I walked onto my first entrance,” Kristen stated. “I literally had to hold on to the door handle to not fall over.”

Oh, you! And now she is one of the biggest stars in the entire world. Look at that… Well done, KStew! Opinions?