We love us some cute love stories, and this is a good one. After filing for divorce from Seal, Heidi Klum has taken a fancy to her bodyguard, Martin Kristen, and now they are in love! 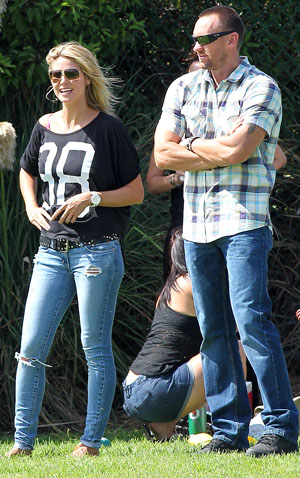 Now that’s what we want to hear!

Heidi Klum is a jolly old soul after finding a new love in the shape and form of her bodyguard, Martin Kristen.

In an interview with the German magazine Bunte, the model/television host not only confirmed that she is in love and “very happy” with Kristen, but that he’s a favourite of her children too.

“This is also one reason why I’m so fond of him,” Klum stated. “He’s been helping me for four years now, and he takes wonderful care of the kids. He plays with them; he protects them. I trust him.”

“Martin is not hiding,” Klum told the magazine. “He’s just not the sort of guy looking for the spotlight. He prefers to stay in the background.

“There will always be people who will criticize whoever I live with, what kind of clothes I wear or what hairstyle I have. At the end of the day, you have to do what makes you happy. That’s the rule I live by.”

Wise words! Although we’re still healing over the Seal-Klum breakup, we’re very happy for Heidi and her new man. If we could just get a few PDA shots of the couple, it would really help… Thanks!

Heidi Klum and Seal called it quits
Single and happy! Heidi Klum brushes off marriage for now
Heidi Klum steps out on the town for first time after split