Miley Cyrus dished on her wedding plans to Ellen DeGeneres, as well as her expectations. Oh, and she also got a lap dance from some male strippers — no biggie. 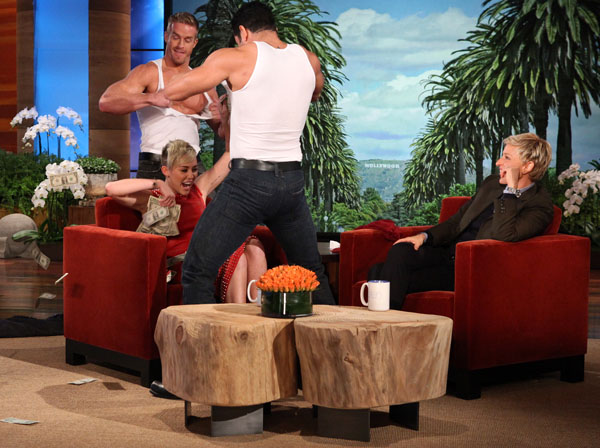 Miley Cyrus paid a little visit to the Ellen DeGeneres Show, and not only was she treated to a strip tease as an early bachelorette party gift, she also dispelled many of the wedding rumours swirling around.

“There is some rumour going around that I’m having, like, 47 weddings,” Liam Hemsworth‘s fiancee stated. “I’m not. I’m having one wedding. That’s my day, and whatever I want on that day will be about me and that moment. That look of love.

“It has to be perfect,” Cyrus continued. “It has to be like a soundtrack in a movie. That’s the one day where that movie crap is real. That romance. That look is the time that you get that… I’ve been to probably 10, 20 weddings, and I’ve seen that real look five, six times. It’s rare that people just stop to really look the person in the eye and know that this is your life together.”

We’re still a little unsure about a 19-year-old planning a wedding, but we’re coping. Cyrus also stated that she isn’t in a hurry to get the wedding on the road, since she’s busy working on a new album.

“I’m, like, so focused on my record,” she told DeGeneres. “I kind of don’t want to be in between touring and trying to plan all that — because I didn’t really realize until I got a wedding planning book what you have to decide on.”

Don’t you think Cyrus’ wedding will be adorable, but in a traditional way? We’re kind of, sort of, almost excited… What do you think?