Somebody’s a sore loser… Donald Trump was so upset about the results of the presidential election that he decided to kill Twitter with hundreds of angry tweets. 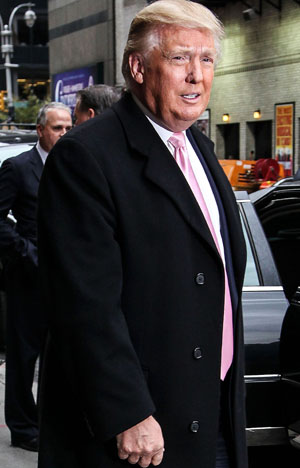 While the Obama diehards are waking up this morning renewed with the flush of victory in the American presidential election, Republicans are not quite as enthused.

Real estate king (and a Mitt Romney supporter) Donald Trump went on an angry tweeting rampage last night when Barack Obama was declared the winner of the election. He even called for a revolution… A little dramatic, no?

“We can’t let this happen. We should march on Washington and stop this travesty. Our nation is totally divided!” Trump tweeted. “Lets fight like hell and stop this great and disgusting injustice! The world is laughing at us.”

And since that wasn’t enough, he also added, “This election is a total sham and a travesty. We are not a democracy!”

And then, “Our country is now in serious and unprecedented trouble…like never before.”

And then another: “Our nation is a once great nation divided!”

Trump added at least three more tweets in the same vein afterward. As far as we’re concerned, this was an election for the next American president, not a battle between the angels of paradise and the formidable forces of evil nothingness. Being upset is one thing, but calling for a march on Washington is pushing it.

Trump needs some camomile tea and a warm quilt to calm those nerves. Opinions?