This may just be the last record Taylor Swift has not broken yet… Well, no more. The singer has sold a record number of album copies in the debut week of Red’s release. 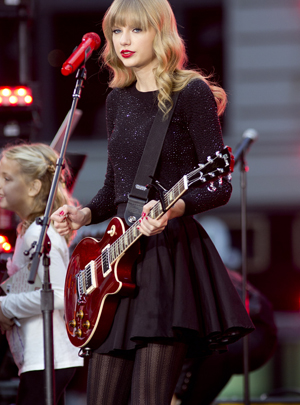 Oh me, oh my… Where shall T.Swift put all these accolades? Tough life.

Taylor Swift‘s fourth studio release, Red, has jumped on the flying pony and soared up to the mountain peaks of album sales. That’s right. The songstress’s newest musical masterpiece has sold 1.2 million copies in just its opening week.

The previous artist to frolic through the fog of such success was Eminem with his 2002 album, The Eminem Show. The record for greatest number of album copies sold in a debut week is held by ‘NSync and their famous 2000 album, No Strings Attached, which reached 2.4 million units.

Swift is playing with some big names, there. You go, girl!

Since the songstress is a bit of an overachiever, this is actually her second album to top one million copies in the first week. Ain’t no thang for this gal.

“They just told me Red sold 1.2 million albums first week. How is this real life?! You are UNREAL. I love you so much. Thanks a million ;)” Tay-Tay tweeted yesterday.

If you haven’t grabbed a copy yet, go ahead… Why not? She’ll be picking up all the awards anyway. Opinions?