In other news, Madonna still has a big mouth. Surprise! The singer angered the crowd in New Orleans by overtly voicing her support for President Barack Obama. 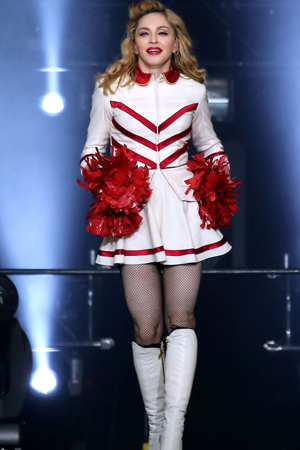 So, Madonna‘s tour is going well. She’s pissing off one city at a time…

The 54-year-old singer received a bit of hate onstage in New Orleans on Saturday, after going on a praising rampage of President Barack Obama.

“Who’s registered to vote,” Madge addressed the crowd. “I don’t care who you vote for, as long as you vote for Obama.”

Subtlety has never been Madonna’s strong suit; we all know that. The patrons of the concert courteously responded to the remark with fervent booing, which the pop icon tried to stifle with a more neutral statement:

“Seriously, I don’t care who you vote for. Do not take this privilege for granted. Go vote.”

Oh, so she figured out how to use the old noodle, eh? When you have a concert hall with a thousand different people, political swaying of sorts is highly discouraged — textbook public speaking. C’mon, Madge!

The songstress has been setting fires all over the world with this touring business, flashing underwear, angering Mother Russia, telling her audience in Washington to “vote for f*****’ Obama.” Simmer down, girl.