Tom Cruise has had enough of this defamatory business! The actor is suing In Touch Weekly and Life & Style magazines for publishing false material. 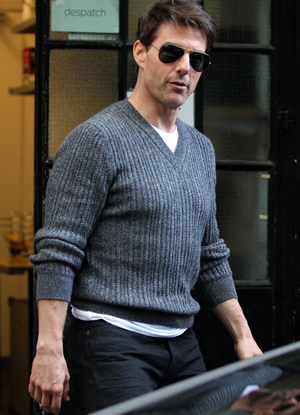 Tom Cruise is en-SURI-ng that nobody doubts his parenting skills.

The actor filed a defamation lawsuit yesterday against Life & Style as well as In Touch Weekly for publishing stories alleging that he abandoned his 6-year-old daughter, Suri, in the wake of his divorce from Katie Holmes.

Cruise references two particular cover stories in the suit — the first published in Life & Style on July 30 and second published in In Touch on Oct. 1 — both toting headlines accusing Tom of ditching his daughter. The lawsuit accuses each magazine of “exploiting a defenseless 6-year-old child on its cover.”

The actor is seeking $50 million in damages. Not too shabby…

“Tom is a caring father who dearly loves Suri. She’s a vital part of his life and always will be. To say he has ‘abandoned’ her is a vicious lie. To say it in lurid headlines with a tearful picture of Suri is reprehensible,” stated Cruise’s lawyer, Bert Fields.

Thus far the lack of quality time with Suri has been accredited to Cruise’s packed schedule and the filming of his newest film endeavour, All You Need Is Kill.

Well, this may come as a shock, but Tom Cruise’s parenting is not the world’s problem. The man knows his responsibilities and feels the pressure; he does not need magazines accusing him of abandonment. What if Suri catches a glimpse of that?

So those magazines better have $50 million rolling around in their pockets… Opinions?

Photo courtesy of Will Alexander / WENN.com

Tom and Katie’s divorce has something for everyone!
Katie Holmes tells ELLE “I know who I am” prior to split
Are Tom Cruise and Katie Holmes dunzo?