Brad Smith isn’t messing around this week. Tonight he cut the ladies down from eight to four as he selected whose hometowns he wanted to visit. 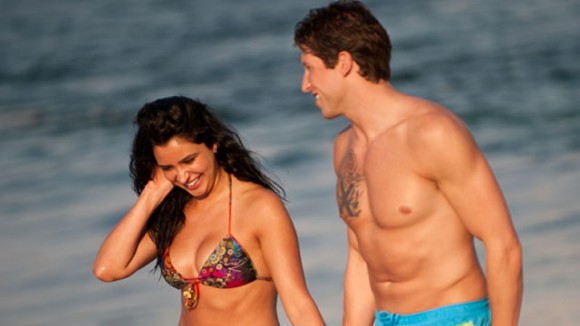 Is anyone else starting to wonder about the security around The Bachelor mansion these days? It seems every season someone runs off in dramatic style to see the bachelor or bachelorette. Tonight it was Whitney who seemed to run off into the wilderness but conveniently wound up at Brad’s hotel room looking like she had just strolled around the corner. Have you ever looked that nice at the end of a workout? Hmm… curious.

If a detective were watching The Bachelor Canada, he would probably consider this week to be a groundbreaking lead in the case of “who is Brad Smith in love with?” The fact that Whitney became the first and only girl Brad told about the heartbreaking deaths of two of his friends is a pretty clear indicator that he has some serious feelings for her. Plus, they did a death-defying stunt together during their one-on-one, which tends to bring couples together and lead to romance on The Bachelor. Guess we’ll know if it stands true for them in a few weeks!

People may frequently tease us Canadians for being too nice, but it sure was refreshing to see the show do the kinder thing by having the dreaded two-on-one be two separate dates rather than the painfully awkward experience that happens on the American version, where two girls and one guy spend a tense evening together before he decides which one of them he’s going to send home. And they even got whisked off to Paris for the date! The Bachelor Canada knows how to get it done!

OK, the show gets many things right, but one thing The Bachelor Canada seems to be lacking is more time. It’s crazy to think next week Brad will be travelling to the girls’ hometowns and each of them has been on only one real date with him. Could you imagine taking a guy home to meet your parents when you’ve spent only a few hours of one-one-one time with him? Yikes!

This was definitely the week of the saddest goodbyes. Before the rose ceremony even happened, Laura B. was sent home on the dreaded two-on-one date, and Chantelle had to say goodbye when she found out her grandfather had passed away and the funeral was in just a couple of days. And then Ana and Britany, who seemed so kind and genuine throughout, were sent packing. Tough night! But it brings us one step closer to finding out who Brad will pick!