We may be more excited about this than the comedian himself. Stephen Colbert is set to appear in The Hobbit trilogy, after meeting with Peter Jackson. 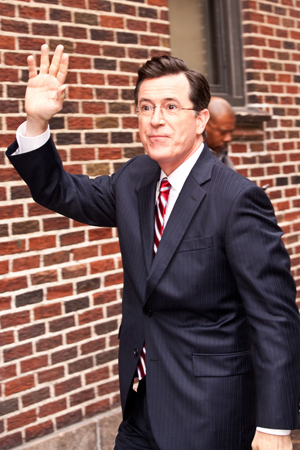 This is just making us green with envy; it’s every nerdy kid’s dream!

Stephen Colbert, host of The Colbert Report (duh!), is set to make a cameo in the upcoming The Hobbit trilogy! No way, no way, no way!

Colbert has been a longstanding fan of The Lord of the Rings and has been signed up as a mystery character. No details of his appearance have been revealed … yet. But we do know it will not be in the first instalment, The Hobbit: An Unexpected Journey.

The comedian hinted at a possible cameo in the films during an interview with Playboy magazine (today’s leader in upright journalism) for the November issue.

“[Director] Peter Jackson invited me to the set last year,” Colbert stated. “I flew out and watched them shoot some scenes and went to some locations. I saw a 25-minute cut, and it was amazing. Jackson knows I’m a big fan of the films.”

Upon being asked whether he will be appearing in the film, the television host answered, “Could be.”

Colbert is the king of funny — we hope that his cameo will be appropriate to his personality. Maybe a guest dwarf? Or a crazed woodland creature? An orc? We shall see.

Stephen Colbert is back!
Colbert and Stewart are sticking around
Colbert Report shut down due to family emergency