We could say she’s spoiled, but that would be too easy. Miley Cyrus told Ryan Seacrest that the new Jonas Brothers song is obviously about her, but she isn’t bothered by it. 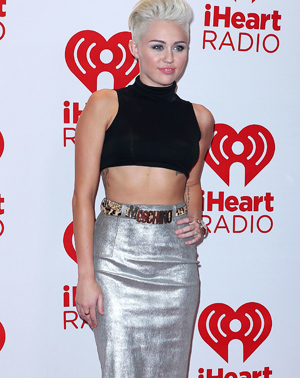 Well, we wouldn’t know what it’s like; no one has written a song about us…

During a candid chatty-chat with Ryan Seacrest on his radio show, Miley Cyrus casually announced that the new Jonas Brothers song, “Wedding Bells,” is about her… But don’t worry — “it’s whatever.”

“I don’t know anyone else who is getting married,” the affianced (to Liam Hemsworth) Cyrus stated.

The lyrics are quite betraying, we must admit. Nick Jonas sings of a past love, giving it another chance, not wanting to hear the wedding bells chime and an anniversary that falls “11nights into June.” Miley Cyrus happened to be Nick’s past love, who is now taken, engaged and their anniversary just happened to be June 11. So how does Cyrus really feel about this?

“Wedding bells are in my future, so I don’t know,” Miley said. “You can’t ever hate on someone for writing about something you’ve been through. I think that you kind of get a fair warning when you date an artist and someone that’s a writer— when you’re going through things that you’re going to end up hearing about it on the radio.”

Deep, profound thoughts right there… Well, at least there’s no animosity here. But how cute would it be if Cyrus was getting married, Nick burst through the doors of the church and they drove off into the sunset together? No? Just us? OK.