Oh my! Someone ban this man from wielding objects of potential harm! Flavor Flav was arrested on assault charges after threatening his fiancee and her son with a knife. 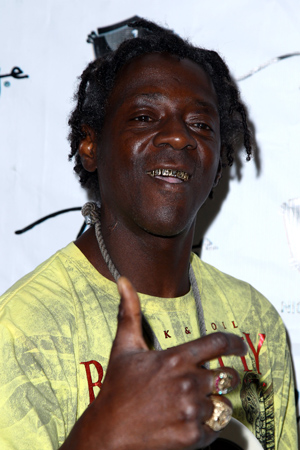 The 53-year-old rapper was arrested yesterday morning in Las Vegas for an alleged assault with a deadly weapon. Oy!

The Las Vegas Metropolitan Police Department responded to a 911 call placed from Flav’s residence. The rapper allegedly got wrapped up in an argument with his fiancee and threatened to attack her teenage son with a knife. We suppose there’s no way his actions were misinterpreted and he was just offering to make a turkey sandwich whilst holding the knife…

Flav was taken into custody and booked on charges of felony assault with a deadly weapon and misdemeanour domestic violence. He was released several hours later after posting a $23,000 bail.

Mr. Flavor is not exactly a rookie in the field of disobeying the law. He has previously been arrested for robbery, assaulting a girlfriend in 1991, attempted murder in 1993, domestic violence, possession of cocaine, many driving offences and now this… His criminal resume is bountiful.

What do you think? Should Flavor Flav be under constant monitoring, or just banned from holding sharp objects?