All the cool kids are doing it, Hugh Jackman might as well do it too. The actor teamed up with South Korean star Psy for a little dance recreation. 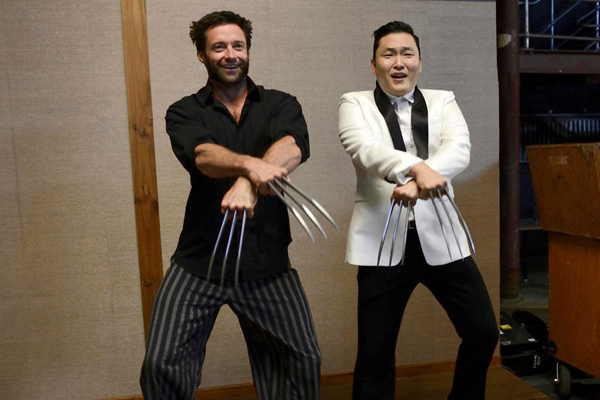 No matter how long you stare at that photo, it will never make sense.

Hugh Jackman has joined the legions of celebrities and politicians who have demonstrated their skill performing the “Gangnam Style” dance. This song is virtually everywhere!

South Korean pop star Psy actually came down to the Wolverine set and taught the actor how to get his jig on… We’re still not sure how we feel about it.

Psy was also quite impressed with the meeting, tweeting, “Had a great time with @RealHughJackman #GangnamStyleWolverine~!!! Lol”

Don’t know what the heck “Gangnam Style” is? You’re one of the few fortunate ones. It’s a song performed by Psy that includes a little dance (rodeo-style) and that has become a worldwide (viral) musical sensation. It’s a great song for the hidden masochist in you…

The tune (and accompanying dance) has claimed many notable people the world over, like Britney Spears and David Cameron (yes, the British prime minister). Now we’ve lost Hugh Jackman to it… What a sad day this is.