We are all patiently waiting for Halle Berry to find the man of her dreams, and so is she! The actress revealed she has no plans of ever giving up on love. 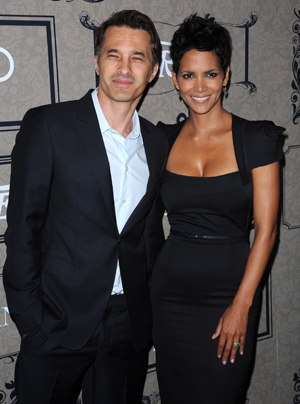 This woman is a champ!

Halle Berry revealed to InStyle magazine that she is still a strong believer in love and is planning a small wedding with fiance/boo, Olivier Martinez.

“It’s another one of those never-say-never things. I’m a hopeless romantic, and I won’t stop till I get it right!” the 46-year-old actress told the mag.

The actress has been previously married twice, first to David Justice , and then to Eric Benet. She has a daughter, Nahla, with Gabriel Aubry, and there’s a bit of animosity in that relationship — custody battles and whatnot. This will be Martinez’ first marriage, who previously had a reputation as a womanizer. Halle certainly thinks differently:

“He’s silly, a clown, and very much the life of the party,” Berry quipped about her hubby-to-be. “Which is good for someone like me. Danny Downer… been there, done that. Now I like Louie Lightfoot!”

Good to hear! We do not understand how a gorgeous woman like Berry would have trouble with men and being on top of the world — it doesn’t compute. But we love us a celebrity wedding and can’t wait to see those photos.

“I do know it will be very small,” the actress said. “I haven’t been to many weddings, but I went to one this weekend with 250 guests. I thought, wow — so this is a wedding, huh? I’ve never had that, nor have I wanted that. I wasn’t even trying to catch the bouquet!”

No big wedding? What? That just sucks all the fun out of it for us… We don’t want to think of celebrities as intimate people. We kid. What do you guys think?

Halle Berry to paparazzi: “Our children should be off limits”
Halle Berry “healthy” after nasty fall
It’s official: Halle Berry and Olivier Martinez are engaged!