Not that anyone needs more reason to adore Bill Murray, but… The actor dropped by a kickball game in New York and joined in the fun. 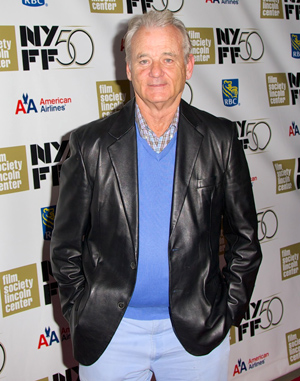 Wow! We really do need to do more sports now…

Bill Murray surprised a group of New Yorkers during a game of kickball on Roosevelt Island on Sunday when he “popped out of nowhere” and joined the fun. How amazing is that?

The news spread like wildfire when CollegeHumor’s Marina Cockenberg posted the photo of the team with Murray on her personal Tumblr page along with the caption, “My friend just had Bill Murray crash his kickball league.”

Oh-em-gee! So what happened?

“He was bouncing the ball… ran over to second base. Played for a bit… Gave us all high-fives, and let us pose with him in the picture,” a member of the kickball team, Chris DiLella, told Entertainment Weekly. Murray even approached one of the players’ mums, who was taking pictures, and “picked her up in his arms.”

The Ghostbusters actor left soon after with three young boys, presumably his sons.

Does anyone else have a sudden urge to take the train down to New York just to stalk Bill Murray? Just us? Come on!

Just a little sumthin’ sumthin’ to put a smile on your face. Opinions?