Oy! Finally some action is being taken to censor Hulk Hogan’s previous, er, action. The WWE icon has filed a lawsuit against those involved in the release of his sex tape. 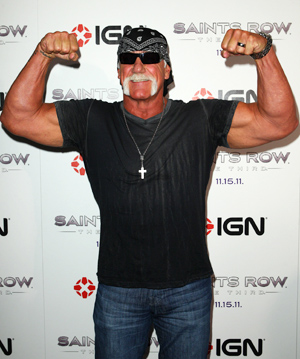 Oh, finally! This needs to be buried and forgotten, please and thank you!

Hulk Hogan, real name Terry Bollea, has filed two civil lawsuits in Tampa, Florida, with the hope of wreaking vengeful havoc upon those responsible for the leakage of his secretly filmed sex tape. Dun, dun, dun!

The first lawsuit on the docket targets Heather Clem, who goes by Heather Cole, and Todd Alan Clem, who goes by — wait for it — Bubba the Love Sponge Clem. That’s right, you read correctly. The suit alleges claims of invasion of privacy, public disclosure of private facts, intentional and negligent infliction of emotional distress and violation of the Florida statute prohibiting the taping of another person without their knowledge. That’s it?

The second lawsuit is against Gawker Media, which posted a little snippet of the video online and refused to take it down after Hogan’s cease and desist demands. Hogan is seeking $100 million in monetary damages, plus punitive damages, a temporary restraining order and a preliminary and permanent injunction to force Gawker Media to remove all traces of the video from its website.

If you’re not well versed in Hogan’s life, you’re lucky. Bubba the Love Sponge happened to be a very close friend of Hulk’s, and the brunette in the sex tape is his ex-wife, Heather. Yes, this man filmed his then wife having sex with his best friend, Hulk Hogan, and then sold it for distribution. We’re crying too…

Hopefully this lawsuit will tie up all the loose ends here and put this story to sleep. No more Hulk Hogan sex tape talk — ever! We shudder. Opinions?

Photo courtesy of B. Dowling / WENN.com