No better way to beat the winter blues than with some good ol’-fashioned comedy. The Golden Globes are gearing up for next year’s ceremony and have bagged Tina Fey and Amy Poehler as hosts. 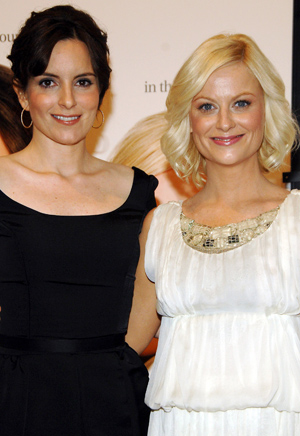 Well, well, well… Lookie here… The Golden Globes have managed to snatch up Tina Fey and Amy Poehler as hosts for next year’s awards ceremony. Somebody in the marketing department should get a medal for brilliance!

The Hollywood Foreign Press Association, Dick Clark Productions and NBC made the announcement yesterday. The 30 Rock and Parks and Recreation actresses will break Ricky Gervais’ three-year hosting streak at the 70th annual Golden Globes ceremony. The pair has previously teamed up for Mean Girls, Baby Mama and numerous appearances on Saturday Night Live.

“The unparalleled comedic timing of Tina and Amy will surely have viewers wanting to tune in to see them in action,” stated Takla O’Reilly, president of the Hollywood Foreign Press Association. “The HFPA is thrilled to have the magnetic duo be a part of the show’s 70th anniversary!”

In terms of ratings, Fey and Poehler are gold! Both actresses have legions of loyal female fans, and it so happens to be that the majority of awards show viewers are women. Coincidence? We think not. So, in the epic war between the Oscars and the Globes, next year the latter may actually take the cake. Especially since the Oscars chose Seth MacFarlane to host the next ceremony, who is a lesser-known celebrity (creator of Family Guy) and male. Girl Power, what what!

The Golden Globes will air on Jan. 13, so mark those calendars! What do you think of the hosting choice?

Amy Poehler and Will Arnett split up!
Getting snubbed by the Emmys isn’t so bad
Summer movies to enjoy in your air-conditioned home