This will not reinstate any faith in romance, that’s for sure. Russell Crowe and wife Danielle have allegedly called it quits after nine years of marriage. 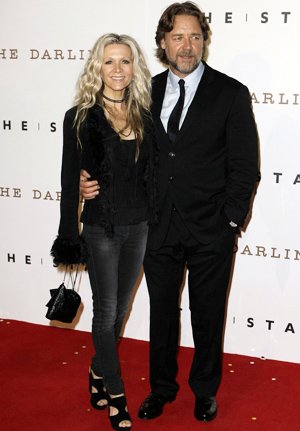 Where is that asteroid, already? Clearly this is the beginning of the end…

The Sydney Morning Herald, which henceforth shall be known as a bearer of ill tidings, has reported that Russell Crowe and wife, Danielle Spencer, have taken the train to Splitsville… Oh Mother of Immeasurable Sadness!

The couple has been in an on-again, off-again relationship since 1989; they played lovers in 1990’s The Crossing. The duo finally married in 2003 at Crowe’s farm in New South Wales in a purpose-built chapel.

Crowe and Spencer have two children together: 8-year-old Charles and 6-year-old Tennyson. The 48-year-old actor is currently in the U.S. filming the Biblical film Noah, while Spencer is in Sydney with the boys.

We cannot process the news right now; please check in later. We have the Katie and Tom split, Johnny Depp and Vanessa Paradis… What’s going on? Can we just superglue these folks together?

The reps have not yet confirmed the rumours, so let us cross those fingers for a bit o’ good luck, yes?

Amy Poehler and Will Arnett split up!
Eva Longoria on split from Tony: “I am secure in who I am”
Chord Overstreet and Emma Roberts split