It’s been a while since Arnold Schwarzenegger was in the headlines for his films, so this is refreshing. The actor is on a book tour and seized the opportunity to promote his new film in London. 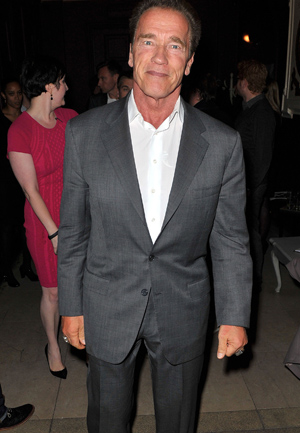 What’s Arnie been up to lately? Nothing scandalous, we assure you.

Arnold Schwarzenegger is touring the U.K. in promotion of his tell-all book, Total Recall, but last night at London’s Sketch (with an invite-only crowd), the former bodybuilder was all about the acting and catchphrases.

Schwarzenegger is making a big-screen comeback in the action film The Last Stand, and took some time off his book tour to promote it, upon the kind request of Lionsgate U.K. CEO, Zygi Kamasa, even though the movie is not slated for release until January 2013!

“I was already going to do that anyway,” the actor stated. “I’m very proud of the movie, and I’ll be back. I’m a big believer in marketing and promotion, after all.”

Anyone else notice his catchphrase in there? Well done, Arnie! The Last Stand is his first leading role since 2003’s Terminator 3: Rise of the Machines. The film tells an original tale of a sheriff in a U.S. border town who, against all odds, must prevent a drug cartel from crossing the border into Mexico. Oh me, oh my!

Sure, the movie will be crap, but it’s action, and it’s Arnie. We will love it no matter what. Schwarzenegger did not neglect to humour the crowd and reminisce about his governing days…

“It was a great pleasure to have been the governor of the great state of California and a great honour to have been voted in twice by the people.” The actor then quipped, adding, “I didn’t take a penny of my salary during my terms. After all, it was petty cash compared to what you make in the movies.”

Will you be lining up to see The Last Stand or, perhaps, picking up Arnie’s autobiography?