No, this not some crazy accident, fight or police run-in. Lindsay Lohan just wants to let you know which politician has her support this upcoming election. 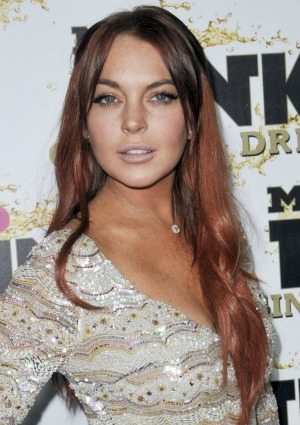 Since Lindsay Lohan is the centre of drama always, it can be safely presumed that her political views have a significant influence on the voting populace of the Unites States of America, yes? We didn’t think so either.

But in case you want to take your mind off the cray-cray mother-daughter fight that has propelled Lohan back into the headlines, may we interest you in a political message? Lohan stepped out yesterday at the Mr. Pink Ginseng Drink event and announced her vote is safely cradled in the hands of Mitt Romney.

“I just think employment is really important right now,” Lin-Lins responded when asked whether she’s been tracking the election campaigns. “So, as of now, Mitt Romney. As of now.”

Lindsay has had her fair share of unemployment, so it only makes sense. Mitt Romney is tirelessly dedicated to nurturing the underprivileged privileged, and we all know that petit teaspoon of the American population is really performing the duties of the mythological Atlas, right? The commoners can wait.